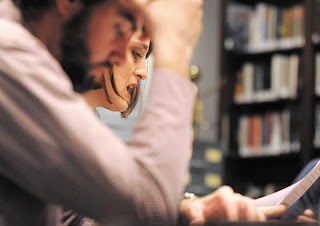 I found this gem as I was going through my hundreds of files. It’s an old newspaper article from before I was published. And the book I referenced? Witch Song. Kinda fun looking back at when I was still a newbie.

Amber Argyle, President, League of Utah Writers, reads through a sample of her writing as Marion Jensen, front, follows along during the group’s monthly meeting at the Logan City Library in , Wednesday, April 23, 2008. (Alan Murray/Herald Journal)
By Devin Felix
Published:
Monday, April 28, 2008 2:57 AM CDT
Putting your writing into the hands of other writers and asking them to criticize it is a harrowing experience, says author Marion Jensen.

�It�s like putting your 3-year-old up there and they say, �His nose is way too big. He�s just homely.� And your first reaction is to say, �You, me, in the parking lot. Now,�� he said.

But if you can fight back the urge to beat up your critics, having others analyze your writing is one of the best ways to make it better, Jensen said.

For that reason, he is a member of the chapter of the League of Utah Writers, a group that meets monthly to read, critique and celebrate each other�s writing.

The group meets in the archive room of the Logan Public Library. With its shelves of books, chandeliers and mahogany table, the room seems a fitting place to sit and discuss the arrangement of words and the conveyance of ideas.

�The League is to support writers in all genres and stages of their writing,� said Amber Argyle, the group�s president.

They come from different backgrounds and are in different stages of life. They are hospital employees, university professors, stay-at-home-moms. And they are all writers.

A few have published works already under their belts.

At Wednesday�s meeting, member Janet Kay Jensen spoke with pride of Don�t You Marry the Mormon Boys, her new novel about a Mormon man in love with a woman who grew up in a polygamous community. The book is a finalist for several literary awards and has even gotten some coverage in the press in , she said.

Marion Jensen has published two books under the pen name Matthew Buckley, Chickens in the Headlights and Bullies in the Headlights. At Wednesday�s meeting he passed out copies of chapter one from his latest, a children�s book called The Super Trio, in which twin boys from a family of super heroes on the cusp of their 10th birthday wait anxiously for their super powers to surface.

Group members followed along as Argyle read aloud the first chapter of a fantasy novel she began that morning. Then they gave their thoughts, pointing out an ambiguous phrase, complimenting a strong image. Later, group member John Nelson distributes chapter 38 of his book, a thriller set in a world after a pandemic has wiped out much of the globe�s population.

They discuss the challenges of balancing writing with work and family. Tamara Copley used to looked forward to becoming a stay-at-home mom so she could have hours of free time to use for writing, she said.

Now that she has a 1-year-old and a 3-year-old, she spends most of her time �chasing babies,� she said, which makes it tough to find time. But she finds the time because she�s a writer. Now she uses her kids as a test audience for her children�s books.

�I�ve heard it so many times, if you want to be a writer, just write,� Copley said.

The League of Utah Writers has chapters throughout the state. In addition to meetings of individual chapters the group hosts conventions. These meetings, which are attended by writers, publishers and literary agents, are a great way for writers to try to improve their craft and get noticed, Jensen said.

The League also provides opportunities for writers to interact with each other online. If a member has a question, someone on the group�s e-mail list is likely to have the answer.

Writing can be a lonely task, Argyle said. It�s usually just one person alone at a keyboard. Having the input of other writers is crucial.

�We get a sense of reality bouncing our writing off each other,� Jensen said.