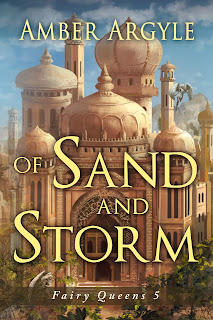 By law, any child born in Idara is free, even if that child is born in a slave brothel. But as Cinder grows into a beauty that surpasses even that of her mother and grandmother, she realizes that freedom is only a word. There are other words too, stronger words. Words like betrayal and prison and death. And there are words even stronger still. Words like courage and family and love.
In the end, if Cinder is to escape the fate of her matriarchs, she’ll have to fight for her freedom. Because true freedom is never free.

Goodreads: https://www.goodreads.com/book/show/20734705-of-sand-and-storm
~
I remember reading an article a while back. It was about a girl taken captive by ISIS. The men and older women in her family were taken outside and shot. She and her female relative were taken to an older building, where men would come and bid on them. The man who ran the slave market hid her when the other men came. She thought he was being kind. He wasn’t. He took her as his own.

She was smart and resourceful. They went from house to house (Christian homes, the owners dead or having fled). She pretended not to like one after another until they finally stopped at a house with a balcony off the master bedroom. It was from there that she escaped with another girl.

I read her story and I thought, this is the kind of stuff that happened in medieval times. Not now. Not in a world where people complain about WiFi cutting out on jet planes or that ketchup packets are too small.

But sex trafficking and abuse have never really stopped, have it? We all think we’re civilized and past such darkness, but we’re only a war away from being dipped back into that kind of evil. The girls ISIS has taken know this. Even here, amidst the strip malls and protest for “social justice”, there are girls and boys hidden in the shadows. Used and discarded like trash while people scream about supposed offenses that are really just differing opinions.

When I saw the Abolitionists, I felt helpless. What could I do? How could a mom from the fields of Idaho raise her voice? The answer became clear. I had to write one of these girl’s stories. Not a real girl, but a fictional one. Cinder’s story was born. The story of a girl fighting a system designed to keep her under the control of people who have long ago lost their morality.

Part of me wants to apologize for this story�for exposing such darkness to the light. But there are people hidden in the shadows of slaver. If no one ever turns to look, help will never come. So I ask that you look. See them�those forced to give up the right to their own bodies. I ask that you be someone�s Darsam. To learn how you can help, visit the Abolitionists, a group who works to free children from sex trafficking: http://ourrescue.org/.