We included so many books Amazon insisted on charging 1.99, but our awesome fans convinced them to price match, so snag the box set before they change their minds!

One week from today, on Tuesday August 18th, Of Ice and Snow will be released in the Daring Hearts Boxed Set! 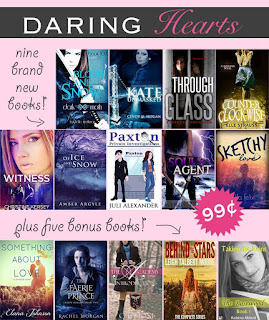 Enter for a chance to win lots of prizes including a Paper White and Kindle Fire – See contest at the bottom of this post.
More than 2000 adventurous and romantic pages

REBECCA ETHINGTON ~ Monsters are real… Through GlassRASHELLE WORKMAN ~ Alice is half demon and totally kick ass! Blood and Snow 10.1 ~ The Dark Moth SocietyCINDY M. HOGAN ~ Some secrets are better left dead and buried. Kate UnmaskedELLE STRAUSS ~ Time traveling is wonky enough… and this time it’s worse than ever. Counter ClockwiseCHRISTINE KERSEY ~ College is murder… WitnessJULI ALEXANDER ~ Solving mysteries is in her blood, but it might just get her killed. Paxton Private InvestigationsAMBER ARGYLE ~ A storm is raging and not everyone will survive. Of Ice And SnowWENDY KNIGHT ~ Her army of lost souls stand between us. The Soul’s AgentLILA FELIX ~ Fasta is an artist, not by choice, but by force. Sketchy Love

C.L. STONE ~ Meet Kota, Victor, Silas, Nathan, Gabriel, Luke and North in a story about differences and loyalty, truth and mystery, friendships and heart-throbbing intimacy. The Academy, ever vigilant. Introductions
ELANA JOHNSON ~ If a picture is worth a thousand words then Olivia’s captured Trevor’s whole story. Something About Love

LEIGH TALBERT MOORE ~ She did not expect to be kidnapped walking to work. And she never expected to be a hero. Behind the StarsRACHEL MORGAN ~ Stolen magical object? Check. Villainous faerie bad guys? Check. Complicated feelings for super hot, pain-in-the-ass assignment partner? Check. Not winding up dead? Working on that one. The Faerie PrinceKATRINA ABBOTT ~ Brooklyn’s new celebutante boarding school is missing one thing: boys! Taking the Reins