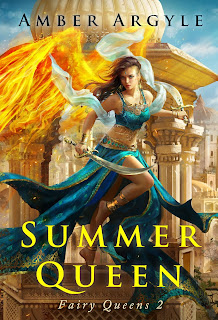 Nelay never wanted to be queen.

Poised to become the most powerful priestess in Idara, Nelay doesn�t have time to become a pretty bauble for the king. She�s too busy saving her people from the invading army sweeping across her kingdom.

But in defeat after defeat, Nelay begins to realize a bigger power is at play than that wielded by mere mortals. Only she can stand between the cinders of her once-great nation and the vengeance of a goddess.

As always, Laura Sava did a wonderful job on this cover. I adore her work!

I wrote this book during perhaps one of the hardest times of my life. My son was in and out of hospitals with a noncancerous bone tumor. He had two surgeries and was in a wheelchair and not allowed any type of physical activity for months.

We also moved to another state, I broke my leg, had surgery, and played single mom while my husband was away. Insurance was, and still is, a nightmare (I’m looking at you, Humana).

This book is perhaps the strongest straight-up fantasy novel I’ve written. One of the themes I explore is leadership. To quote from the book: �To be a true leader, one must not simply be strong. One must also be selfless.�

And I can’t mention one of my books without talking about the main characters. Nelay doesn’t start off as this weak, timid little thing being oppressed. She’s poised to become the most powerful woman in her kingdom. But as with most of those in power, she lacks empathy.

Rycus knows who he is and what he wants, but unlike Nelay, he is also willing to sacrifice for those he loves. And Rycus loves Nelay “as the sun loves the sky.”

I also want to announce that I’ve written a prequel for Summer Queen, entitled, Of Fire and Ash. It’s with my editors now and will be published as soon as it’s finished. You can find both on Goodreads here and here.  I hope you’re as excited for the next installment in the Fairy Queen Series as I am.

Feel free to copy and paste this blog post, or snag the elements you want and make your own.